Good King Leonardo has decreed that its time to review another eclectic group of comics, so let's review three comic books this week that feature characters somewhat outside the mainstream of superhero-themed comic books:

IDW Publishing has recently revived for a fresh publishing run the ever-popular Rocketeer comic book title. Long-time fanboys and fangirls know very well the popularity and history of this character; created in 1982 by the late artist/writer Dave Stevens, the original comic book title was very popular, culminating in the Walt Disney Company releasing in 1991 a Rocketeer feature film. Set in 1938 Los Angeles, the comic featured stunt pilot Cliff Secord, who finds a mysterious jet pack and becomes the masked Rocketeer hero/adventurer. The Pulp Era series was also famed for Dave Stevens's high quality illustrations of Secord's girlfriend Betty, drawn as a lookalike of famed 1950's pinup girl Bette Page. I originally planned on reviewing issue #2 of this new series, but found it so interesting that I went back and also read issue #1, as such combining the two issues into a single review.

The concept of the new title is to pay homage to both the late Dave Stevens and his beloved character creations with four stories presented in each issue. Each story is produced by a different well-known comic creator, including issue #1 stories written and/or drawn by Mike Allred and Kurt Busiek/Michael Kaluta and issue #2 stories created by Mark Waid, Darwyn Cooke and Gene Ha. Three stories stand-out in particular. "The Rocketeer" kicks-off issue #1 with a fast and furious action/adventure plot written and drawn by John Cassady, beginning with classic gangster action and ending on a perfect comedy note. "It Ain't The Fall That Kills Ya..." leads-off issue #2 with a Mark Waid plot that's a sharp commentary on fame, fortune and movie industry politics in Hollywood. And issue #2's "Episode Six-Betty Saves The Day!" is a wonderful Darwyn Cooke tale featuring girlfriend Betty replacing Cliff in the lead action role as an homage to the old Republic Studios weekly movie serial adventures.

This new comic book series is that rare treat of a title that I just couldn't put down. It was simply brilliant of IDW Publishing to structure the comic book as a monthly four-story series featuring a cavalcade of the best and brightest comic story creators that the industry has to offer. While the three stories singled-out above were my personal favorites, all eight stories in these two premier issues are of equal production quality, entertainment and just-plain-fun. There isn't a comic title out there right now that does a better job of presenting the pulp fiction/art deco action adventure era, with each story providing a different interpretive spin on that world, as seen by the various artists and writers involved in this project.

Two final elements deserve notice in this title. The first is an exquisite Betty pin-up page in issue #1 as drawn by artist Jim Silke. And secondly, the title honors the late Dave Stevens with a full page notice in each issue soliciting donations to the Hairy Cell Leukemia Research Foundation, Inc., to help battle the disease that took Dave Stevens much too soon from the world of his wonderful comic book creations. So don't just add this new series to your comic book reading pile, but instead place this comic at the very top of that ever-growing pile to read as soon as possible!

Marvel Comics is currently up to issue #4 in its mini-series revival of Ruse. For the uninitiated, Ruse was a Crossgen Publications title that ran about a decade ago. The concept was the unusual premise of presenting a Victorian-era detective series with a science fiction twist. While the story universe resembled Sherlock Holmes's London, the setting was actually on the planet Arcadia in the Victorian London-like city of Partington. The Holmes-like "world's greatest detective" in the series was Simon Archard, assisted by his assistant/partner Emma Bishop in adventures that included fantasy elements. Well-known writer Mark Waid launched the Crossgen title and returns here to script the Marvel series, with art by Mirco Pierfederici.

The multi-issue storyline is entitled "The Victorian Guide To Murder." A page one narrative informs the reader that to-date, the tale centers on Simon and Emma pursuing Simon's old detective mentor Lightbourne, who is effectively using blackmail and murder to advance a devious scheme to control Queen Victoria and grab control for himself of India. Without being a detail spoiler, a lot of fast-paced Holmes-style deduction, sleuthing and big-time battle action rolls-out from page-to-page in this issue. A humorous sub-plot threads its way through the storyline, in which Simon and Emma keep-up a witty banter about Emma's equal role in the detective partnership, versus Simon's efforts to see her as a subservient assistant. All of the various plot sub-elements advance nicely to a thrilling conclusion, which nicely wraps-up this four-issue mini-series in a satisfying ending.

This comic book presents an off-beat and interesting genre style that makes for a refreshing change of pace from the usual comic book hero storylines. While I can't speak to the first three issues, this fourth and final issue in the mini-series excludes any real fantasy elements and gives us a well-presented and very entertaining take on the classic Victorian detective genre. A-lister Mark Waid's dialogue and story pacing is top notch and Mirco Pierfererici's artistic style is well-suited to this particular storyline. The issue also succeeds very well as both a stand-alone, single issue read and a final installment to the four-part title series.

Two final review notes are worth mention. First, the "Solving The Mystery" letters to the editor page in this issue pitches for readers to write or e-mail Marvel Comics if they wish to see future installments of Ruse. And secondly, there's a fun preview as a second story in this issue of the upcoming Mark Waid-scripted run of a new Daredevil title thats an additional fun read. So an enthusiastic recommendation for you to expand your superhero-reading horizons with the addition of this historical thriller title to your comic book reading list. And don't forget to e-mail or write to Marvel Comics to tell them to produce future editions of Ruse! 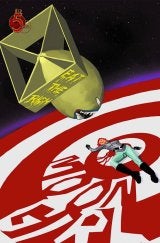 Red 5 Comics had a very interesting preview of this new title as a second story feature in their Atomic Robo Free Comic Book Day title, so I thought I'd check-out a full issue of this off-beat new series. The character of Moon Girl was actually created in the Golden Age by Gardner Fox and Sheldon Moldoff for EC Comics. Moon Girl is Princess Klara, royalty from an Eastern European country who comes to America and fights crime using superpowers derived from a moon rock. The original EC presentation of Moon Girl is credited as being one of two comic books that started the historic trend of EC horror comic books. The Red 5 Comics re-boot of this character is scripted by the team of Tony Trov and Johnny Zito, with art by someone who calls himself The Rahzzah.

The issue #2 storyline continues a multi-issue storyline which interweaves two sub-plots. In the main storyline set in 1955 New York City, Moon Girl battles a villainess named The Sugar Plum Fairy, who's out to zombify (is that a real word...if so, I claim all copyrights to it!) the city populace. A second sub-plot alternates between 1938 and 1955 and focuses on a battle of wills between Moon Girl and her old world mentor/trainer Mistress Satana. When Klara escapes to America to start a normal new life, Mistress Satana follows her to New York and implements a very bloody strategy to drag her fleeing prodigy back into the world of being Moon Girl.

This is one of the more intriguing and very weird comic books to come down the new issues pike in quite awhile. The mix of The Rahzzah's unique and gorgeous artwork with the odd juxtiposition of flashbacks and heavy dose of s&m mixed into the Mistress Satana storythread brew-up into a fever dream of a tale that feels almost like a hallucinatory version of a Grimm's fairy tale. Frankly, on first read I disliked the entire feel of this comic, but it hooked me into a second read a few days later and it grew on me. So I'm giving it a positive thumbs-up review recommendation with an important caveat: this is not your father's (or grandfather's, more likely) Golden Age-innocent style of Moon Girl. This is a Moon Girl redesigned for the jaded, early 21st century, full of modern-day storytelling blood, horror and s&m. So while I suggest keeping the kids and old-timers away from this title, it is a very interesting change-of-pace read for young adult and middle-aged readers, alike.

Our latest contest challenge was for you to correctly identify three famous television dog actors that we quizzed you on. And our winner selected via a roll of the dice from among several correct entries is (drumroll, please...) Gregory Goding, who correctly tells us that Eddy The Jack Russell Terrier starred on Frasier, Duke The Bloodhound was one of our favorite characters on The Beverly Hillbillies and Rex The Wonder Dog German Shephard starred back in the Golden Age of television on The Roy Rogers Show. Congratulations to Gregory, who wins the first prize $10.00 gift certificate to That's Entertainment!

As all baseball fans know, during this past week Derek Jeter of the Yankees became only the 28th player in major league baseball history to reach the 3000 hit plateau, hitting a home run for his 3000th hit. Our baseball trivia challenge for this week is for you to e-mail us at Gordon_A@msn.com and tell us of the previous 27 players to reach the 3000-hit plateau, who is the only one to also hit a home run for his 3000th hit? As always, in the event of multiple correct answers, our winner of the first prize $10.00 gift certificate to That's Entertainment will be chosen via a roll of the dice.

That's all for now, so have a great comic book reading week and see you again next week Here In Bongo Congo!